Take the pressure off.

I never saw a pressure cooker until I was, like, 32 years old.

It wasn’t a kitchen tool in my parents’ or grandparents’ houses, so you can imagine my intrigue when I first saw my mother-in-law cooking chicken in the pressure cooker. What an odd way to do it!

It’s never so much a set-it-and-forget-it kind of thing. It’s usually more of a put the food in there, fret about it all the while it’s cooking, then hope on a wing and a prayer you’ve set it up right and it all turns out when you release the pressure and open it up. Pressure cooker cooking is its own kind of acquired skill, totally different from regular cooking methods, like sautéing or frying or braising or baking. As if those skills don’t already come with a certain level of pressure not to mess it up, I just struggle to see how adding more pressure helps.

Obviously, I do not own a pressure cooker of any kind. (Including an Instant Pot. I don’t get those either.)

What’s funny about this whole idea though, is that I totally do add more pressure to everything, all the time. All the fucking time!! I have for my whole life. Maybe there was no literal pressure cooker in my kitchen, but there was certainly a figurative one. And I’ve absorbed the skill of cooking my life with it, no matter how odd a way of doing it.

For as long as I can remember, I’ve put myself into a pressure cooker.

Adding more and more pressure and steam, hoping I was getting it right, praying things would just work out. The difference between cooking and life is that I’ve never really been successful in releasing any pressure and opening up the lid for myself, like ever. I don’t think I’m the only one.

Like, in school, I always put extra pressure on myself to get good grades, be the best, do the “gifted” kid things. Everything was competitive between about five of us at the top of our class, and God forbid I wasn’t the top of the top. And to what end? I went to a decent state school, not Harvard. Exactly what would’ve been the difference between a B average and being valedictorian? (Which, yes, of course, I actually was.) And I basically wasted my entire college experience reading the actual books for classes from cover to cover instead of living my life.

I put extra pressure on myself to perform the best in the arts, too. I couldn’t possibly be satisfied with just creating. No, I had to push myself to (again) be the best, go for first chair, get the solo at the concert, snag the lead role in the play. Trust, I loved performing for the sake of it, but I still just had to put enough pressure on myself to do it well instead of strictly enjoying being part of an ensemble.

I tend to put extra pressure on myself socially. And this particular area really feels like I’m actually inside of a pressure cooker too, because you never really know how friendships are going to turn out. And pressure in this department usually leads to them falling apart or blowing up. It’s a delicate balance that I’m only now in my late 30s finally beginning to figure out in even the smallest ways.

I put a ton of pressure on myself in my relationship. Always have, probably always will. I want to be a good wife, I want to be the wife my husband wants. I want us to be happy and content together, and in ourselves. I pressure myself to keep a neater house and not let the laundry get away from me and never run out of any groceries and always be done with work on time.

Can you relate to any of this?

I mean, I bet you can. I’m forever talking to people and clients and friends who give endless examples of how they put extra pressure on themselves, sometimes without even knowing it.

That, my friend, is a lot of pressure.

In fact, most of the time, it’s too much. As if it’s not already enough to tend to every responsibility we have in this world at a low simmer, we stick ourselves and everything else in the pressure cooker and expect it all to turn out exquisitely. And then we’re surprised when we finally go to open up that lid and a whole chicken explodes in our faces.

Listen, I get this. Obviously. I just shared all the ways I put myself under tons of pressure every single day. I’m a person in the world too, and not immune to cultural expectations and conditioning and the daily bombardment of messaging and what it all means. But I’m also a person who has learned over the years to regularly attempt to question all that stuff. Yes, I may sometimes put too much pressure on myself, but I’m a bit better at recognizing when I’m doing it and deciding whether or not it’s the best method for a particular desired outcome.

Like, recently, I’ve been thinking about hosting a webinar or workshop or course or…something. I haven’t quite been able to put my finger on it, but I’ve been dancing with ideas. That dance was turning a bit competitive as I increased the pressure on myself to make something, and soon, when I got an email from a friend and colleague.

“Hey, Kourtney,” she said. “I’d love to connect and brainstorm some ideas for how we can collaborate soon!”

Instantly, that pressure valve cracked open. I saw putting all that pressure on myself to do a new thing on my own and get high-level results instantly was the wrong way to go. Immediately, I knew that taking some pressure off myself by collaborating with a like-minded and similarly driven entrepreneur would be better – less overwhelming, way more fulfilling, even exciting. We talked for an hour, came up with some really great ideas, made a plan, set a date, and all along the way, I couldn’t stop thanking her for reaching out to do this.

“It just takes the pressure off,” I kept saying. Over and over again.

Because it does. It’s not that I won’t show up completely and put all kinds of effort and heart into this workshop we’re going to do – I will, and it’s going to be so awesome. It’s just that I won’t feel like I have to white-knuckle every part of it all on my own, setting outrageous expectations for myself, all while the walls close in and my head feels like it’s about to explode.

So yeah, even just that one example has been a great reminder to really think about the added pressure we put on ourselves. To ask where it’s coming from, why we’re increasing it. To reflect on whether it’s necessary at all. To consider releasing that pressure, even a little at a time. And to decide if putting ourselves in a pressure cooker at all is really the most suitable method for living our lives.

Like, maybe there’s a less fraught way to do the things we want to do?

I invite you to think about any pressure you’re under right now. Home life, work life, community life, fitness life, whatever. Think one more step to any additional pressure you might be putting on yourself in any of those places. Perhaps time constraints, performance expectations, specific numbers, solo effort when team support might be appropriate.

Where and how are you adding more pressure that’s not actually helping?

Now, think about taking pressure off. Where can you release some of that pressure? Open up the valve, slowly – or all at once?

How can you let out some steam?

Think: Start with one or two workouts a week instead of five. Learn about Intuitive Eating instead of going on a restrictive diet. Shore up and communicate your boundaries in your relationships. Delegate or say no at work. Sleep a little later. Let your kids make a few mistakes and learn from them. Be exactly what you need to be for yourself, as much as you can, first. Enlist help, or a partner, or a professional in any of these areas.

Take. The pressure. Off.

We can tell ourselves all day long that the pressure cooker life is the best life, but I think we all know that’s not true. There’s absolutely no reason why you have to rush everything – or anything. We get enough pressure no matter what, we do not have to choose to add more.

Maybe, instead, it’s the gentle simmer that makes life even more delicious.

For more ideas of life outside the pressure cooker, sign up for weekly emails. Better yet, let’s work together and find the ways to take pressure off in your life. Set up a free call to chat with me about it, or email anytime. 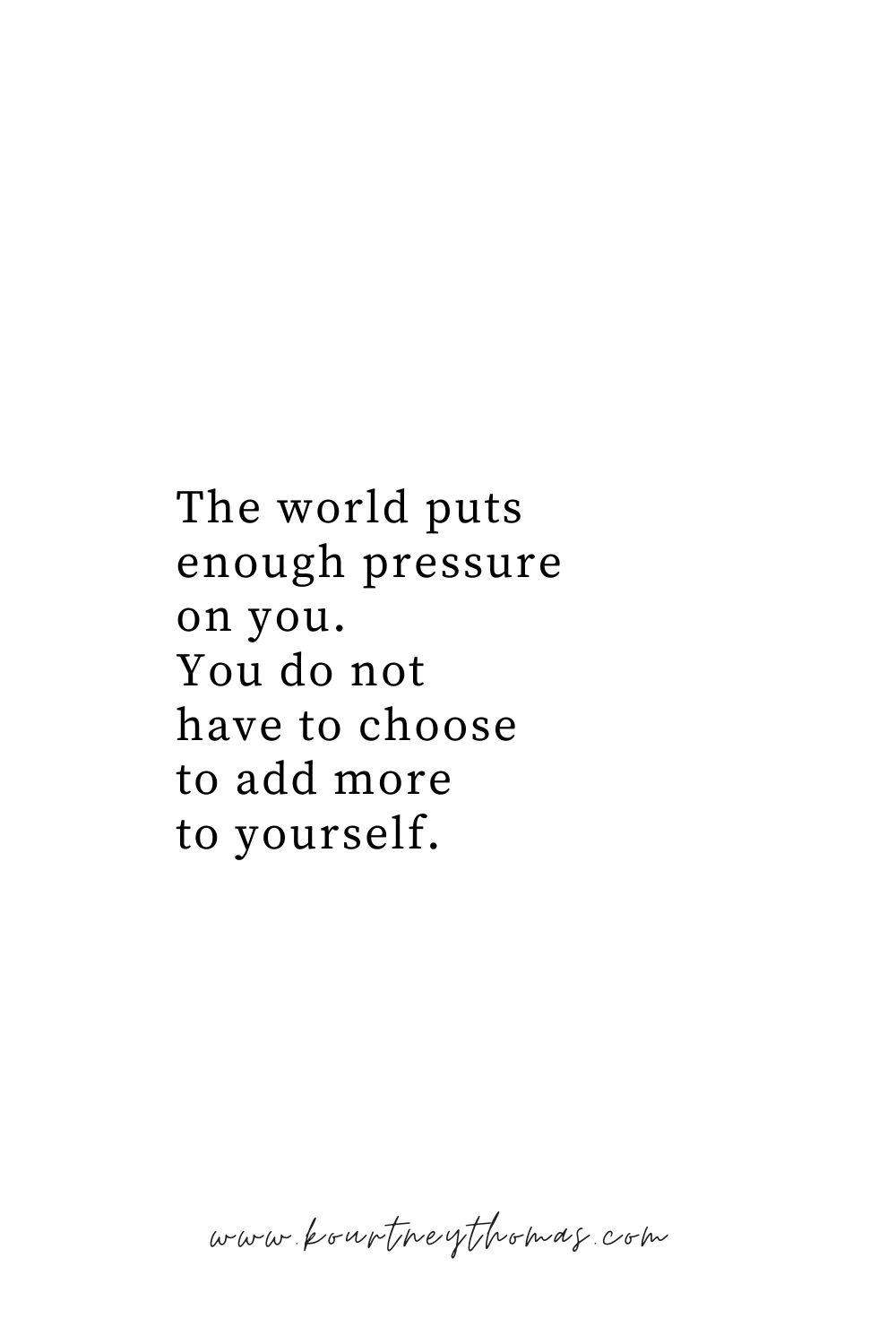