One of the most difficult things to avoid. 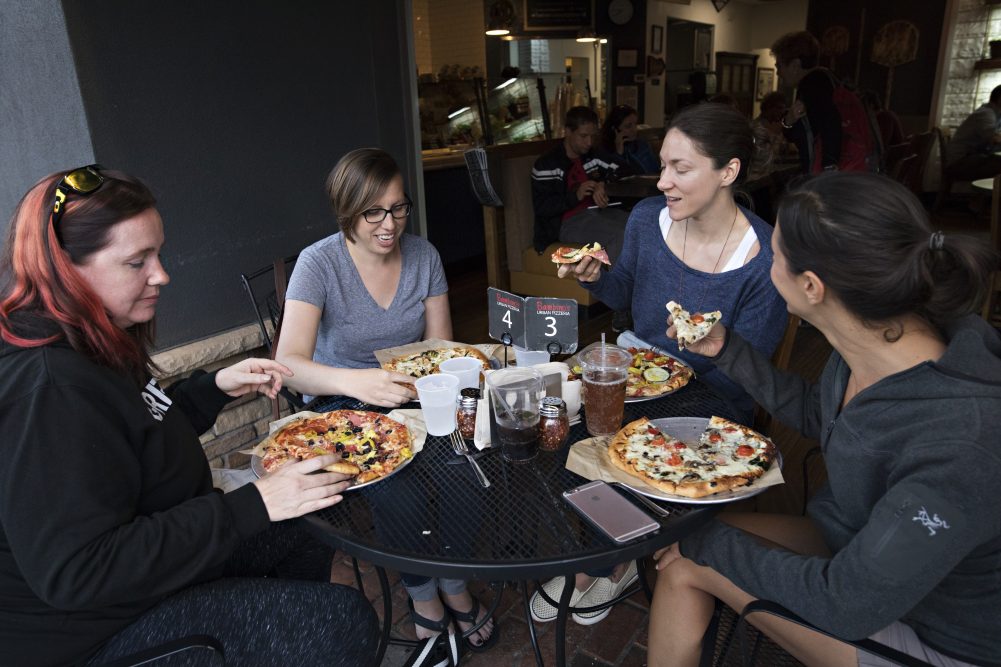 Usually, this looks like reading the headlines (via Axios, The Broadsheet, and The Skimm), checking out the daily Seth Godin, and quickly rolling through less frequent favorites (like Girls Gone Strong, James Clear, Raptitude, Paul Jarvis, and Peloton), plus any other subject lines that catch my eye in my Promotions folder. (You can see why it takes me an hour.) This month, I’ve added a lent devotional, sent out by my church, The Gathering. It’s a quick read and good addition to the morning routine.

(As a disclaimer, this email is NOT about God stuff, so hang tight if that’s not your jam.)

One of the emails spoke to the topic of abundance, and the closing prayer/meditation/affirmation was lovely, minus one little bit, which I’ll leave you to sort out:

God, this morning let me open up the door and allow you to go first. I will follow you. Allow me to share the abundance that you have given me with those around me. You have fed the birds; you will feed me (maybe a little less, so I can shed the holiday pounds). Thank you God for all you are doing for my family and me. Amen.

Wanna take a guess at what stuck out to me as NOT FREAKING LOVELY?

“Maybe a little less, so I can shed the holiday pounds.”

Of course. Of course, we could not have a conversation about…anything?…without inserting some diet culture and body image issues.

Literally, could not even say a prayer without including a desire for weight loss.

It’s upsetting. And disappointing. And not unexpected or uncommon, though it is unfortunate and unhelpful.

I wonder if the author of this email really even thought much about it. Probably not, if I had to guess. This is such a normalized part of conversation in our culture, no one really bats an eye. No one realizes how damaging it is, how much of a problem it is, and how much it perpetuates unhealthy mindsets and behaviors related to our bodies and our health.

How often do you insert offhand comments like this into your conversations?

And can I ask you something else? How do you feel when you throw these things out? And after? Do you think about how they might be received? Do you think about these flippant or careless asides? Are they careless? Why are you saying them? What are they adding to the conversation?

What are they taking away?

Let me be crystal: this isn’t meant to make you feel guilty or ashamed. We’ve all done it. It’s often very difficult to avoid, in fact.

Which is why it’s important to call attention to that fact.

We know that words have power, for ourselves and others. And whether we consciously or subconsciously speak or hear them makes no difference. The result is the same. I’m arguing that we be more conscious of our words. What’s behind them. Whether they’re important enough to voice, and what might be instead. Same goes for being conscious of how we’re responding to the words of others.

Body chatter, often negative and/or directed toward attaining certain societal ideals and standards, is everywhere in conversation. Since my purpose is to change the conversation, I’m highly attuned to it, probably more than the average person. I notice this stuff, and I say something in nearly every single case. (Including the ones that make my husband kick me under the table or pinch my thigh.) I believe it’s important to consider all the questions I posed above, and to get comfortable doing that in real life, in real time.

That’s usually a “get comfortable with being uncomfortable” situation, because it’s gonna make somebody uncomfortable, even if it’s not you. Over the years, I’ve discovered ways to do that, levels that range from the least to the most uncomfortable, with even the most getting less so over time.

Here’s how it can go in your daily conversations:

Level 1 – Ignore the comment and don’t engage with the person about it. (Often people are looking for some kind of response, be it commiseration, soothing, whatever.)

Level 2 – Mention your notice of and discomfort with the comment, but nothing more. Continue the rest of the conversation. (ie: “Hey, I hear that comment as negative body talk, and it makes me uncomfortable.”)

Level 4 – Mention the comment, your discomfort, and a little more about how you feel about it. Then, continue or change the subject. (ie: “Hey, I hear that comment as negative body talk. It makes me uncomfortable because of [insert your story here]. Let’s talk about something else.)

Level 5 – Mention the comment, your discomfort, state your intentions, and make a request. (ie: “Hey, I hear that comment as negative body talk. It makes me uncomfortable because of [insert your story here]. I’m trying not to speak to myself or others in this way anymore, so I’m going to mention it or stop us any time the conversation goes down that road. I’m asking for your support in that today and going forward. Thanks for understanding.)

Notice the subtle differences in each option. Notice they’d mostly apply to a one-on-one or small group conversation, potentially places like social media comments. Notice how any option could possibly provide an opportunity to engage further on the subject in a productive and positive way. These are essentially versions of calling in – a compassionate and patient version of just calling someone out, publicly or privately.

That said, and I may catch some flack for this one, but listen – I think calling out these kinds of comments is appropriate in some instances, with some people. Sometimes, in some situations, it’s the best approach. When that’s the case, be as kind as you can, but be firm. (ie: “Hey, that’s fat-shaming and it’s not cool. Don’t say those things around me ever again.”) Sometimes, we need to draw attention to things in a very pointed way to get the picture, and hold ourselves, and others, accountable. Draw your line.

But come on, if you care, you gotta think. And if you think, you gotta act.

Know that while the tips for interacting above are important and useful in acting, most of your action needs to take place in interaction with yourself. So often, it’s the inner dialogue that’s the problem. We can try to blame a lot on society and life experiences and other external factors – which are true and real!, but that’s not going to be the action that changes the conversation.

What is important enough to voice? What adds to the conversation? What would it look and feel like if everyday conversation never included disparaging comments about bodies, food, movement, or clothing that are totally off topic anyway and might cause hurt to yourself or others around you, conscious or unconscious, perpetuating toxic shame, guilt, and hatred of our bodies forever and ever?

I’m. Not. Being. Overdramatic.

Maybe a little for effect. But just enough effect to emphasize the point that this seemingly inconsequential banter has genuine consequences. Which you’ve likely felt for yourself.

So, at the very least, I’d love you to consider becoming more aware of flippant comments and implementing any level of the practices I suggested.

But more than that, I’d invite you to seriously consider exploring the questions I posed more deeply in Fitness Unraveled. We’re going to walk through them, gently, compassionately, with plenty of support, patience, and time. Throughout that process, you will for sure change your internal dialogue, and you’ll feel strong enough to change external dialogue in your life too, forever and ever.

The eight spots available in this group of Fitness Unraveled will open up on April 14. (And if you put yourself on this waitlist, the secret only you’ll be in on is early access to those spots a day early, on April 13.) The group itself starts April 27 and runs through July 19.

Here’s to caring, thinking, and acting.

If you have questions, email me anytime, or schedule a call directly below.